How about some fake playing cards?
The art is obviously all stolen from some poor fan artist out there who has quite a certain style. The box has G3s on it, but the art is all G1. I've never really seen a whole set of fake anything before. I do like the art, it seems soft and sparkling somehow, so it is very too bad it was all stolen and the person likely never got a dime.

These 'extra' ponies are likely stolen fanchars or ponysonas, probably commissioned by that artist as they're also in the style. What likely happened is the fakers raided the gallery, and couldn't tell which ponies were real characters & which were fan. But still...you'd think they'd want to avoid ol' Bullet Betsy there or whoever that was...because she's too similar to Gusty on the 7 (though she has a gray stripe) while Hearse probably is Medley like.

[You must be registered and logged in to see this image.]

What do you think of these cards?
Have you seen them before?
I would buy a deck that had authentic art & was a licensed item. There are enough G1s to have a different pony on each card.

Amazing! I think that work is by Marco in Italy? I didn’t even look at the cards before I handed you the bag. Super cool. I think Wiggles found them at some market In Asia.

Sad about it being stolen. It’s been very common with his art unfortunately. I’ve seen diary’s and notepads with his work on taobao and AliExpress in the past too.
_________________
[You must be registered and logged in to see this image.]
Clipper's Wish List 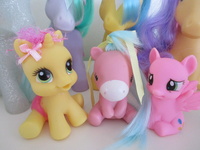 oh my gosh that is beautiful art, so so sad it was all stolen, darn that makes me so angry. My husbands an amazing artist and i said to him a day ago to water-mark his art if he ever downloaded it somewhere so i just showed him this post.
thanks so sharing. i will have to check out the dollar stores over here in NZ, just in case they pop up.

Deffo Marco Albiero!!!!! Linkie to his website:
[You must be registered and logged in to see this link.]
His Pony art is amazing!!!