I grew up in the UK in the 80s, so I obviously have a soft spot for the toys we in the UK had at the time.
Doll-wise, the first of those is the UK Sindy doll. The Sindys of the 80s & before that looked closer in proportion to actual human beings than I've ever seen a Barbie look, plus they included ballerinas & Shaping Up who could move more parts of them than almost any other doll, including 2 parts of the neck, fully rotating shoulders, elbow joints, wrists & ankles, as well as the usual knees. As a child I used to have the 80s Sindy Super Home, 3 floors of living space & a patio on top for the dolls to sun themselves.

Second on the last was a delightful doll made by Hornby, called Flower Fairies. Each fairy was based on a different flower & had matching wings for her back. You could also get naked (wearing just the knickers) fairies to dress in some of the delightful fairy costumes. Flower Fairies were the right size to ride on the backs of the MLPs I had at the time, & often rode them on adventures. I never got to own any of the cute playsets they had, like the squirrel they could ride on, the bed they could sleep in, the pegasus drawn carriage & so on, but the dolls themselves were adorable.

Third is a truly international doll dear to most hearts of the 80s: Strawberry Shortcake. Strawb & her pals were all scented dolls whose theme was fruits & berries. One of the Friends I'd still love to find is Orange Blossom & her butterfly pet Marmalade, as I used to have her.

Next up in the list was a very rare pair of dolls I was given one Christmas. The girl doll was called Victoria Plum, & she had a friend called Ben, & a pet hedgehog. I've been scouring eBay on & off for the dolls for ages but never seen them. I can't help but wonder what happened to them. They went great with the MLPs as well.

Last but not least are dolls I only read about in MLP & Friends: the Moondreamers. The idea of dolls with glow-in-the-dark features was great & my Pony-mad brain didn't figure out how wonderful they were, along with their animal friends (found everywhere on eBay), & their playsets.

Doll-wise that's pretty much it on here. Barbie did come into my life a few times, but I never liked her constantly pointed feet. I liked Skipper though, she was more sensible in her footwear, & I don't mind Ken either... 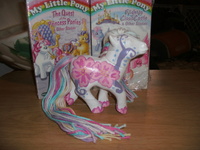 Re: My favourite dolls

Ah, dolls, the most common past time for kids growing up!

I do have some Moondreamers and Strawberry Shortcake still. Of course Barbies. I also have Rainbow Brite plush dolls and Cabbage patch kids, if those count. I have some small dolls that I do not recall what the brand was, but they are less than half the size of a Barbie and look like mini versions of them. I also have some Jem and the Holograms dolls. I think most of them broke over time though but I definitely want to get new ones to have them in my collection again!