New to the forum!

New to the forum!

Hey, there! I'm new to this forum, but not to the community.

My name is Heather, I'm 28, and I live in VA. I began collecting and restoring ponies when I was 13 or so, and joined the MLP Arena back then (under the name Surprise). I owe all my pony knowledge to them! Lol!

I'm mostly active on instagram nowadays under the same name. I collect G1's, G3's, and G1's, mainly, but I do like G2's as well. :3
I collect all sorts of other vintage and modern toys as well (Moondreamers, Strawberry Shortcake, Fairy Tails, Barbies, Monster High Dolls, Ever after Dolls, Pikmi Pops, Num Noms, Smooshy Mushys, MojMoj, Carebears, Wuzzles, ect!)
I live with my four cats, dachshund, turtle, and boyfriend, Ben. We have a porch cat and a porch opossum as well. They count too!

It's nice to meet you all!

Re: New to the forum!

Good to have you aboard & Merry Christmas/ Happy Hanukkah or whatever you celebrate!!! We have a Discord too so feel free to pop in & say hi!!! 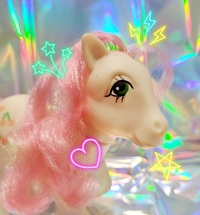 Re: New to the forum!